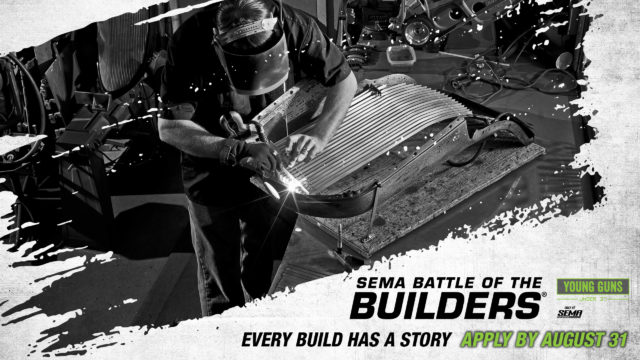 — Winner to be announced Friday, November 2, at SEMA Ignited —

The 2018 SEMA Battle of the Builders competition began with more than 300 vehicles entered into the annual competition by vehicle builders and car customizers from across the United States. These builders represent an elite group of individuals who have demonstrated extreme talent, creativity and craftsmanship in modifying cars, trucks, and SUVs.

Industry experts narrowed the field to select the top 12 finalists, who will now judge one another on Friday at the SEMA Show and vote to determine who will be named the Ultimate Builder of the 2018 SEMA Battle of the Builders.

The SEMA Battle of the Builders winner will be announced at SEMA Ignited, taking place after the trade-only SEMA Show closes, on Friday, November 2, from 3-10 pm , in the Las Vegas Convention Center (LVCC) Platinum Lot, located on the east side of LVCC (on Swenson Street, between Desert Inn Road and Sierra Vista Drive). Hundreds of vehicles will exit the Las Vegas Convention Center after the SEMA Show for the SEMA Cruise and make their way to SEMA Ignited. Formula Drift demonstrations, exhibitors, products and celebrities from the SEMA Show will be on-hand along with food trucks, music and entertainment.

About SEMA and the SEMA Show

The SEMA Show is a trade show produced by the Specialty Equipment Market Association (SEMA), a nonprofit trade association founded in 1963. Since the first SEMA Show debuted in 1967, the annual event has served as the leading venue bringing together manufacturers and buyers within the automotive specialty equipment industry. Products featured at the SEMA Show include those that enhance the styling, functionality, comfort, convenience and safety of cars and trucks. Additional details are available at www.SEMAShow.com or www.sema.org, 909/396-0289.